New technology shows the amount of hydropower we have in stock

A newly developed sensor measures how much water there is in the snow. The technology provides answers to how much hydropower we get when the snow melts and can predict avalanches and floods.

In a new project led by NORCE, the researchers will develop new technology that can measure the water content in snow. It is important to know more precisely how much water we have in stock so that the power companies can plan energy production better.

- This way we can make better use of resources. We can produce enough electricity when needed, and at the same time ensure that we keep the right amount in stock in case of dry periods, says Peter James Thomas, chief scientist at NORCE and project manager for the new project.

A third of the precipitation in Norway falls as snow. When the snow melts, it makes an important contribution to the water in the rivers and reservoirs. Snowmelt can also lead to large floods.

Good calculations of the amount of snow are important for planning hydropower production and drinking water supply. There is also a need for knowledge of snow amounts within climate research, avalanche warnings, and flood warning.

Snow's water equivalent is a measure of how much water the snow corresponds to when it melts.

- It is a demanding variable to measure, so we welcome all good forces that can improve and simplify a difficult measurement task. We hope that a fresh pair of eyes might bring new and innovative solutions to the market, says Møen.

NVE is subordinate to the Ministry of Petroleum and Energy and is responsible for managing water and energy resources in Norway. NVE also takes care of the state's administrative tasks within avalanche prevention.

To find out how much water there is when the snow melts, you go out today and measure and weigh the snow.

Snow depth is measured along fixed routes or various points within an area. The density of the snow is measured by weighing the snow. Snow depth multiplied by density gives a measure of how much water the snow corresponds to when it melts.

- You take a couple of measurements and assume that this gives a good representation. There will only be random samples, the results are inaccurate and the costs are very high, says Thomas.

When the new sensors are in place, you don't have to physically go out to measure and weigh the snow. There are already sensors that can be laid out, but these cover a smaller area and are relatively expensive.

- The new sensors monitor a much larger area and are more cost-effective, says Thomas.

To obtain information about how much snow there is over large areas, data from various satellite images is also used. But the satellite data is inaccurate if it is not calibrated with good and representative data from sensors on the ground. The new sensors being developed will be used for this.

Hydropower is a large part of the energy mix and an important asset of the green transition. When the snow lies in the mountains, it acts as a natural storage place for energy. When you know more precisely how much hydropower is in stock, it is easier for the power companies to manage the energy we have available.

- For example, in periods of high wind, you can use energy from wind power and reduce water production. It is also important to know if there is little water from melting snow so that you do not plan to use more water than is available, says Thomas.

The work is well underway

Some components have already been developed in other research, but the sensors are completely new. The researchers have had a preliminary project, so the work is already well underway. At the end of the preliminary project, a measuring station was installed at the Norwegian Directorate of Water Resources and Energy's (NVE) reference station in Myrkdalen, a couple of hundred meters above the hotel area, to monitor the amount of snow.

- About 10 square meters are monitored here, but in the new project we will develop sensors that can monitor several 100 square meters, says Thomas.

In the preliminary project, the researchers did lab experiments to test the sensors and they modeled different designs.

- We eliminated a number of risk factors and everything indicates that the concept is working. Now we will develop method and design, says Thomas.

This is technology that will be in the field for a long time. One of the challenges is to ensure that the technology can withstand it. The sensors will be used to calibrate satellites, but the sensors themselves must also be calibrated.

- This must be done out in the field to be able to adapt to the conditions of use, says Thomas.

The new sensors can also be used to monitor movement and can therefore detect if an avalanche is underway.

- Naturally, one expects gradual changes in signals when the snow melts or new snow arrives. If there is a sudden rise or fall in the signal from the sensor, this may indicate that the snow is moving and warn of a possible avalanche, says Thomas.

The project has a technical steering group, with members from NVE, Statkraft, and Energi Norge.

- We can get useful feedback from them on whether the ideas are good or whether we need to think a bit more, says Thomas.

The project "Online, distributed permanent monitoring system for Ground truthing of Snow Water Equivalent Satellite Data" is financed by the Research Council of Norway. The project starts this year and lasts for 2.5 years. The preliminary project lasted 18 months. 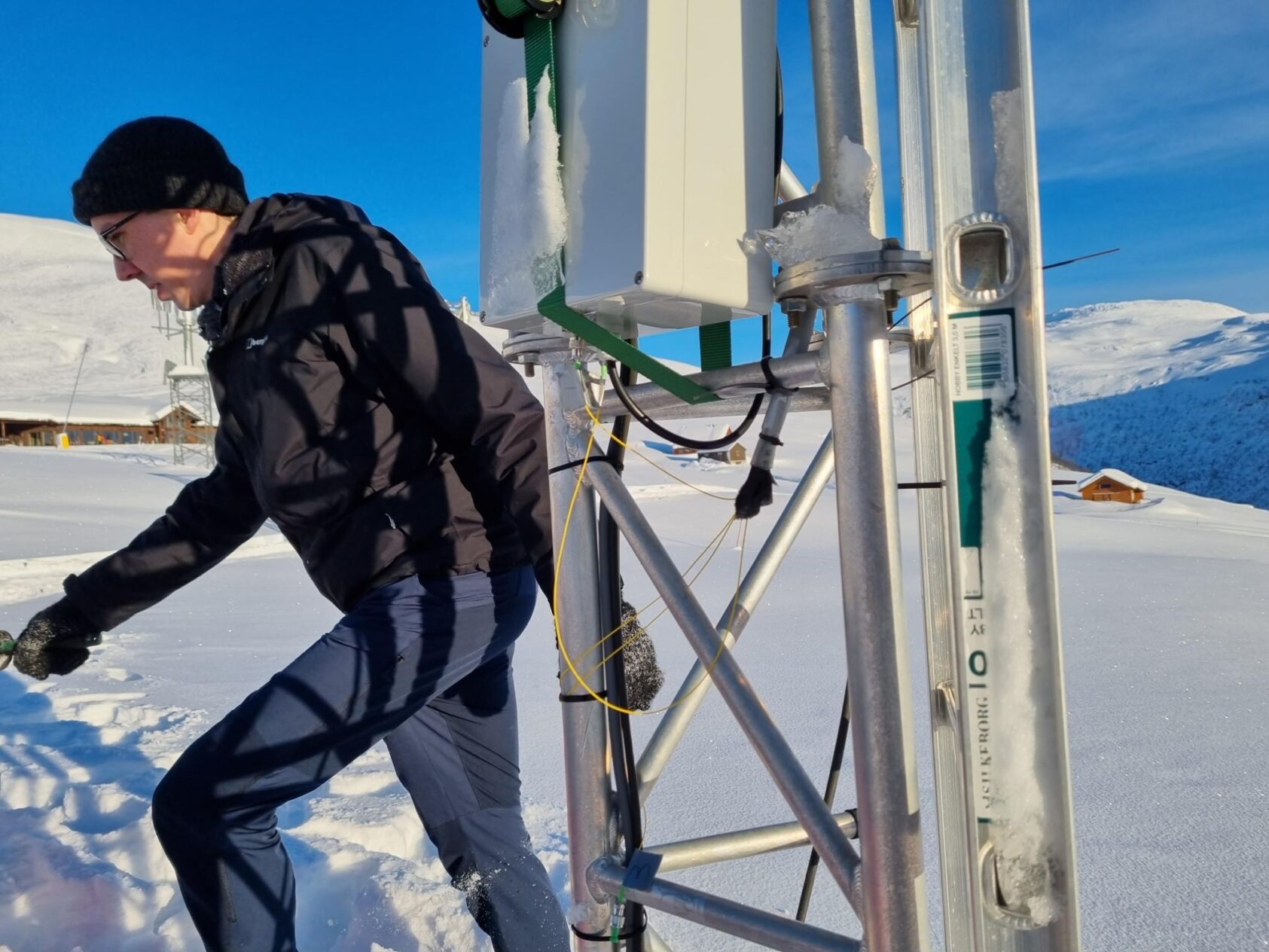 Here we see NORCE researcher, Adam Funnell, and part of the technology that captures and forwards the signals from the sensors on the ground under the snow.